Previously, I’ve only bought bicycles directly from bike shops. In April 2018, I decided to buy a bicycle online. It has been a frustrating experience, but an opportunity to learn.

Summary of lessons, in case the whole shebang is TL;DR for y’all.

Experienced bike people would say “duh!” to all this, but you have to learn these things somehow to become experienced. I am now slightly more experienced than I was before.

It all started with a ziplining trip to Colorado, back in August 2017. I happened to spy in the window of a bike shop a wee penny farthing! Oh, what hijinks I could get up to with that!

Circumstances were not favorable to make a purchase at that time, but I continued to think about the bike. I looked up the information on the head badge: The Wheelman, Chattanooga, Tennessee. Alas, these bikes were once made by Coker Tire, but are no more. Bummer!

I kept googling, and Google led me to another website of a company that claimed to build their own highwheel bicycles – and their stock included a miniature version as well!

Here’s a screenshot of the company’s website that describes their bike-building chops: 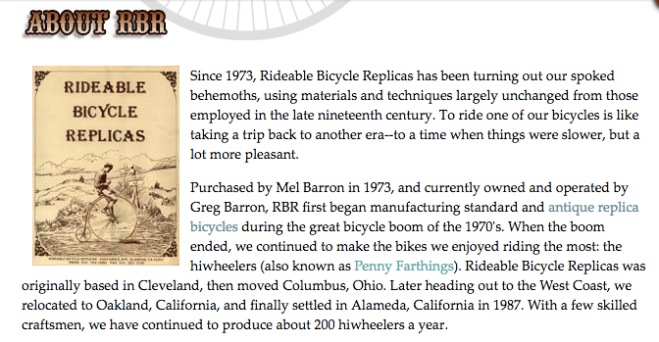 The website and an email to the shop led me to believe that they made their own mini highwheel bicycles, too. (For $189, the price I was charged instead of the price listed on the website? Silly me!)

I came home to find a bike box on my porch — damaged, courtesy of UPS: 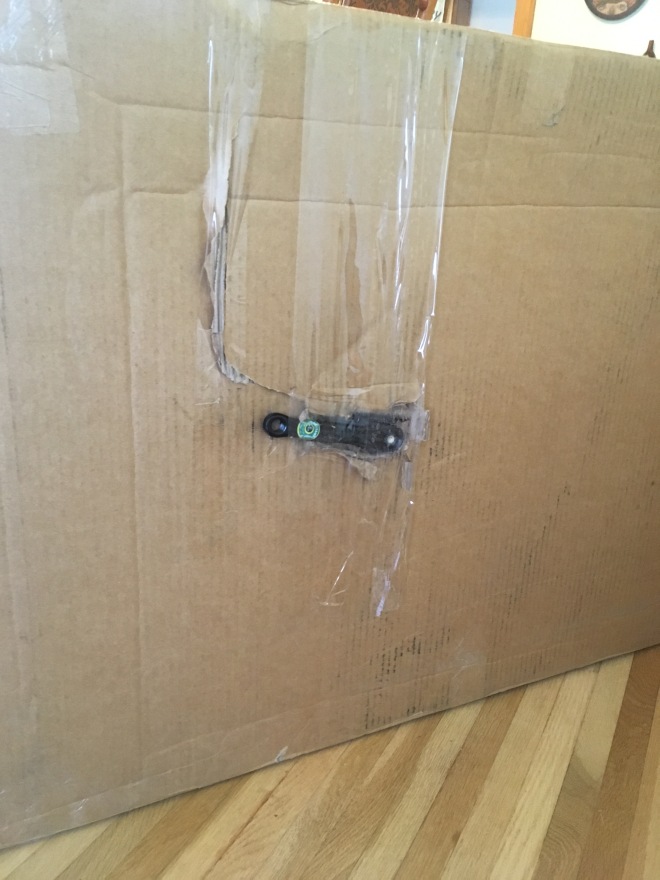 The crank arm of the bike was protruding from the box, and had paint scraped off of it, and the dust cap was missing. Pretty obvious someone realized the damage, as they had applied a bunch of packing tape as a bandaid. 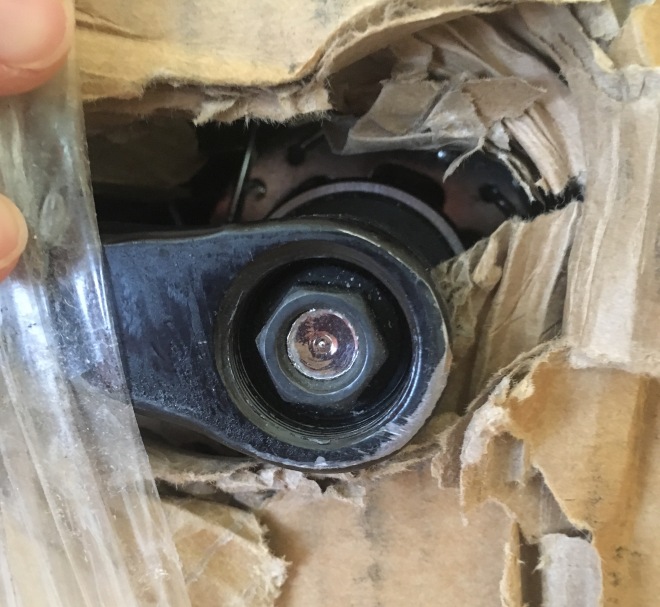 Silly me, I emailed the bike shop instead of immediately calling UPS to come pick up the package they damaged.

Silly me, I opened the box to see if the bike was bent up. It didn’t appear to be, so I fully unpacked the box, cutting a whole bunch of zip ties to get things out. As I removed the bubble wrap from the bike, I discovered that there were multiple gashes on the paint of this brand-new bike that were *under* the bubble wrap. Because I cut everything apart and could not prove how the bike was initially packaged, I was unable to file a claim with UPS. 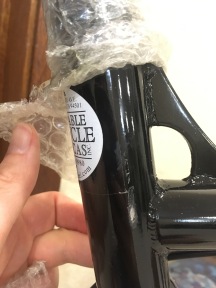 But, really, the whole UPS thing is a frustrating sidenote. The only damage I could say for sure was most likely caused by UPS was the scrape to the crank arm / missing dust cap. The bigger issue was that the overall quality of the bicycle was not as high as my expectations were.

The bike was not made in the United States, as I’d first thought. It was, per the inner box it came in, MADE IN CHINA.

I commenced a series of emails and a phone call with the seller that left me feeling belittled and ignored. When I again contacted the seller with a report from a visit to my local bike shop, the seller offered to ship me a new frame, and said “pretty sure I have cranks around here.” (Unintentional double entendre?)

I replied, in part:

Would another frame be any better if it came from the same manufacturer? It’s the “you get what you pay for” theme is what I am coming to understand.

I never heard from the seller again, and I decided haggling over a $189 bike was simply not worth the time and frustration. So, I got to work turning lemons into lemonade, with support from Sonny’s Bike Shop.

Here are the problems I found with my mini highwheel bicycle, as shipped, and how I dealt with it:

Problem: paint was flaking off the bike where the metal was joined at the rear fork, likely because the joint was not properly cleaned before painting. The multiple scrapes to the paint elsewhere on the frame also left the metal exposed to corrosion. 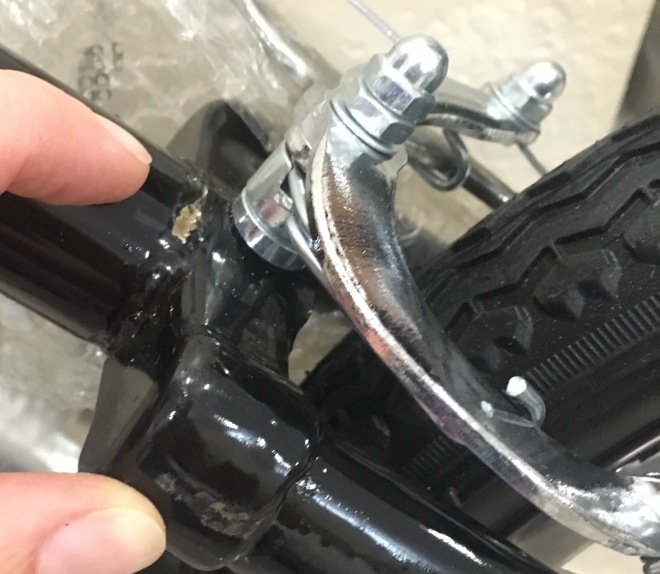 Solution: I had the frame sandblasted and powder-coated at All-Star Customs. Pretty sparkles! (You should see it in direct sunlight!) 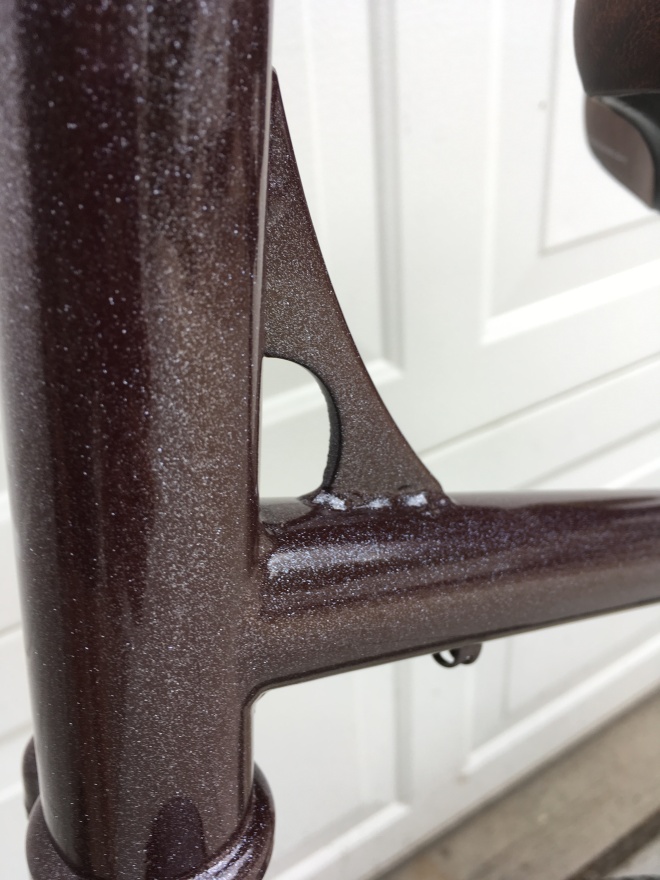 A couple of asterisks. *I’d wanted the color to be grape purple, but it turned out more of a burgundy. *Should not have had the seat post top or bottom portion of the stem powder-coated, as they were too thick to accommodate assembly and had to be chipped down to get the parts to fit. 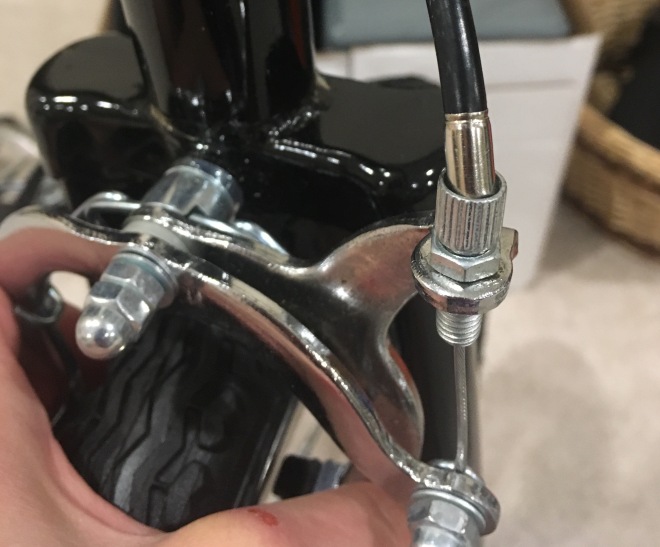 Solution: remove the brake entirely – the bike is direct drive, like a kid’s tricycle, so it can be slowed by applying pressure to the pedals. This modification potentially increases the risk of me doing a “header” if I need to stop quickly, but I’m willing to take that risk with a “small” 28-inch front wheel.

Problems: The joints between metal edges of the underside of the front fork were spots instead of full seams. A solder bead inside the head tube peeled up and scraped against the steer tube. 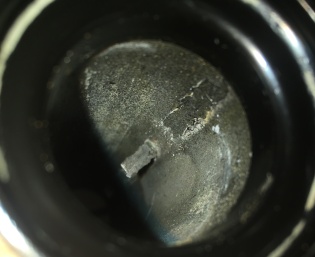 Solutions: Don’t ride the bike like a mountain bike or otherwise do anything to put the frame strength to extreme test. Have the peeling solder filed off in the sandblasting/powder-coating process.

Problem: One of the pedals would not turn. When I took the pedals apart to adjust them, I found that the number of ball bearings in each identically-sized cup-and-race varied from 9 to 11. One of the cups was also dinged. 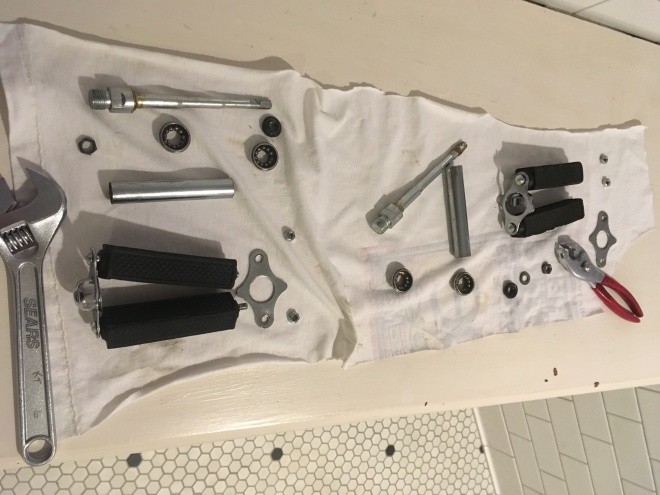 Solution: Clean up and regrease the whole kit and kaboodle, fill the races with 11 bearings each, and tighten everything up to Goldilocks (not too tight, not too loose – just right).

Problem: the caged bearings in the headset were gunked up with dirty, dry grease. (Not an uncommon problem.)

Solution: *carefully* clean and re-grease the bearings and cages. (The cages are thin metal and bend easily!)

Solution: Tighten up to Goldilocks (not too tight, not too loose – just right)

And here you have it, folks, I present to you:

(So named because the color resembles an “old claret” paint chip, and “ye olde” works in the name for an old-timey-style bike. And lemon, because, well . . . making lemonade here.)

Yeah I wound up spending almost twice again what I initially paid for the bike to make the repairs and upgrades, but now I have a pretty sweet little custom bike. 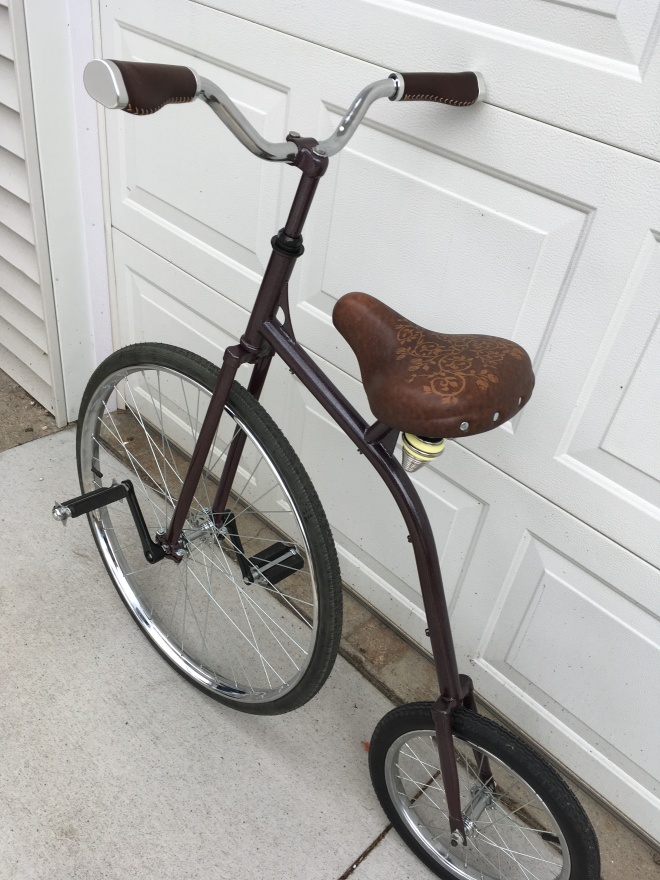 I’m learning how to ride it.

To get on the bike, I do like a real highwheel rider would: I put my hands on the handlebars and, using the crown of the rear fork as a platform to stand on with my left foot, I push the bike into motion as with a scooter with my right foot, then hoist myself up into the seat, put my feet on the pedals, and go. A video clip here, for the visually inclined.

I am finding riding Ye Olde Claret Lemon to be a good arm workout because my pedaling creates a wobble in the direction of my front wheel that I have to counteract with the handlebars. Maybe this will improve as I get better at riding it.

To get off the bike, I slow it down enough that I can safely tip over to the side and land on my left foot.

3 thoughts on “Lessons learned buying a mini penny farthing online, or how Ye Olde Claret Lemon came to be”