The map shows the best routes to travel around the community by bike, based on things like traffic speed, traffic volume, and number of traffic lanes. Pathways and designated bike lanes are included where they exist, and the routes have been connected mostly with lower-stress residential streets. To develop a functional network of bike routes, though, some higher-stress routes had to be included because no other options currently exist. These sections are designated as “cautionary bike routes.”

This map was drafted by an engineering firm contracted by the Panhandle Public Health District via the Tri-City Active Living Advisory Committee. This map is intended to be used by people with a basic level of cycling skill and knowledge of how to interact safely with motorized vehicle traffic. It has not, as yet, been officially sanctioned by local officials. The plan is to develop this map to a point where it can be printed and distributed for the use of locals and tourists getting around by bike.

The hope is that this map can be a catalyst to developing improved bicycle infrastructure for our transportation system, such as better river crossings, designated bike route signage or protected bike lanes. The key to making change is to have as many people as possible involved in and supporting this process.

Your input is important to make this map the best it can be, to demonstrate to elected officials that bicycling is important, and to show local transportation professionals the most critical places to target for improvement.

You can leave comments directly within the map. There are instructions below on how to do this. If you are having a hard time with the map, feel free to leave a comment on this blog post instead.

Thanks for your interest and input in this project! Change can sometimes be slow to come, but the future looks bright for biking in our community!

If you would like to get email updates related to this bike mapping project, send me an email at kt AT ktbradshaw DOT com.

How to use this map

This map was designed to meet dual purposes – an on-street bike route network map as well as a sidewalk network map for pedestrians. These instructions focus on the bike route function.

You can zoom into the map to read the street names, and zoom out to see the overall routes. 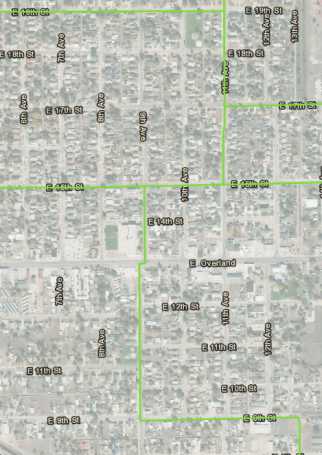 Clicking on an icon will pop up additional information.

By default, the map opens to the “map key” window. You can get back to this window at any time by clicking on the icon that looks like bullet points.

Choosing what information the map displays

This map is designed to show both biking and walking information. To choose what information the map displays, click the “layers” icon.

To see the bike routes map, and to be able to make comments, make sure the following boxes are checked:

If you want, you can turn on the “activity centers” information layer to show schools, government buildings, and retail centers.

To make a bike-related comment on a section of the map:

1. Make sure the “bike comment” box is checked under the “layers” section.

3. Zoom in to the portion of the map on which you want to comment.

Background of this mapping project

Because of its relatively flat topography, compact area, and network of grid streets, the Scottsbluff-Gering-Terrytown community is very bikeable. However, people may not be familiar with the best routes to take on a bicycle, which are not necessarily the same routes people are familiar with from their experience traveling by car.

In 2015, the Western Nebraska Bicycling Club started a project to create bicycle route maps based on club member input. The project ran into complications trying to reconcile the different types of comments from people with more cycling experience or less cycling experience, and between people with recreational riding in mind, versus using bicycles as a form of transportation.

In 2017, the Panhandle Public Health District, with the direction of the Tri-City Active Living Advisory Committee, commissioned Felsburg Holt & Ullevig (FHU) to produce a bicycle / pedestrian assessment. See the final report here: FINAL Plan 12.29.17. The PPHD got involved this the bike map project (as well as projects involving walking maps and signage) because of the public health benefits of getting more people traveling in physically active ways like biking and walking. For further reading:

The structure of this bicycle / pedestrian assessment helped to resolve the problem of “who is this bike map created for?”

FHU noted that a bike route map should be geared towards the largest segment of people possible, which would include the riders that are “strong and fearless” (estimated 4-7% of the population) and “enthused and confident” (estimated 5-9% of the population) who were likely to belong to the bike club, as well as the estimated 51-56% of the population who are interested in cycling more, but concerned about safety. (The remainder of the population is people who will not or cannot ride a bicycle.) For further reading about “the four types of cyclists,” check out the work of researcher Jennifer Dill.

FHU evaluated the “bicycle level of traffic stress” (LTS) of the major streets in the community, based on street characteristics and the volume and speed of motorized vehicles. Here’s an explanation of what the LTS levels mean:

For a super-wonky deep-dive into this concept, check out this Mineta Transportation Institute report. For a more readable explanation, see this Alta Planning & Design blog post.

FHU then focused on identifying a bicycle route network using infrastructure that the majority of people would be comfortable riding:

Because the network could not be completed using without including higher-stress cycling routes, some “cautionary routes” of LTS 3 or 4 had be included.

Few sidewalks are included on this route map.

Local ordinance prohibits riding bicycles on the sidewalks in downtown Scottsbluff (20th Street to Railway, Ave B to 2nd Ave) and Gering (J Street to U Street, 9th Street to 11th Street).

While riding a bicycle on a sidewalks elsewhere in the Twin Cities area is allowed, it may not be the best option. Bicycle safety experts recommend that adults not ride bicycles on sidewalks because of the higher risk of collisions with vehicles turning across driveways and traveling through intersections. However, there are some situations where a sidewalk is more comfortable for cycling. See this post from the League of American Bicyclists for details on sidewalk riding law.

When riding on the sidewalk:

For further reading on sidewalk riding, see this document from Cornell University.

Most children are not capable of bicycling in traffic until they are about aged nine or ten. The complexities of traffic are simply too much for their developing bodies and minds. For this reason, many communities allow sidewalk bicycling for children. Young children should be accompanied by an adult to help them navigate through hazards such as driveways and other intersections. It would be a mistake to presume that sidewalks are completely safe from traffic.

The length of time this map will be open to comment is still TBD, so don’t delay!