When the alarm on my watch started beeping at 4:45 a.m., I did not want to leave the warmth of my sleeping bag – my tent was cozy, my air mattress just the right firmness. But, the final day of riding Cycle Greater Yellowstone was at hand, and the route opened early today – 6:30 a.m. – to make sure the bulk of riders would make it through the canyon area east of Norris during our window of law enforcement support and before weekend traffic got too crazy.

At breakfast, everyone was bundled up in their cold-weather riding gear. 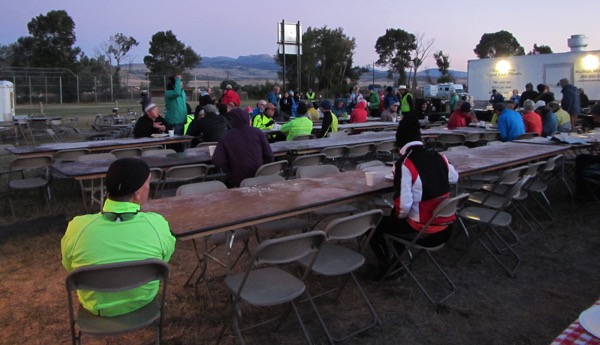 I was so grateful for the hot coffee, which defrosted a small portion of the table and warmed my hands. 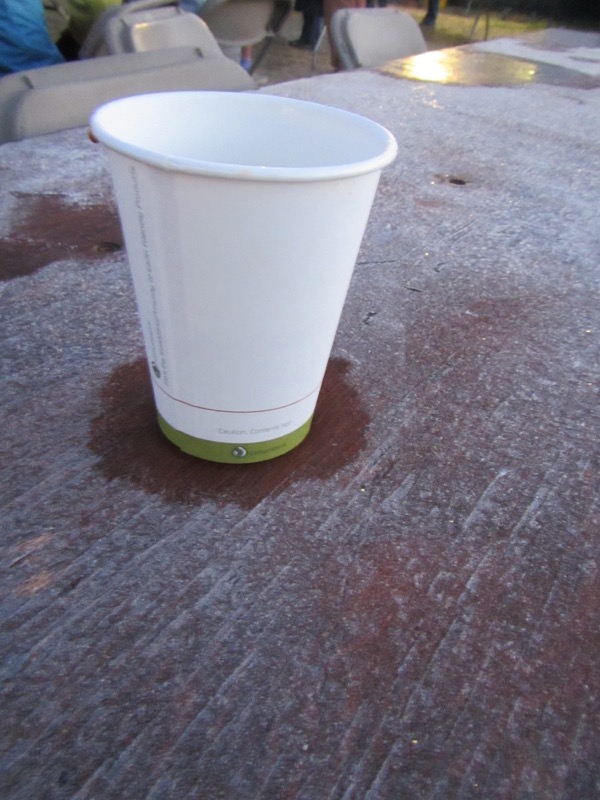 Mist was rising from the pond in Lions Park. That white dot on the water bottom right is the reflection of the moon.

We hit the road at 6:45 a.m., along with another couple on a tandem – an unusual custom rig designed for the smaller rider to be in the front. We saw a total of three tandems on the ride this year, in addition to ours. 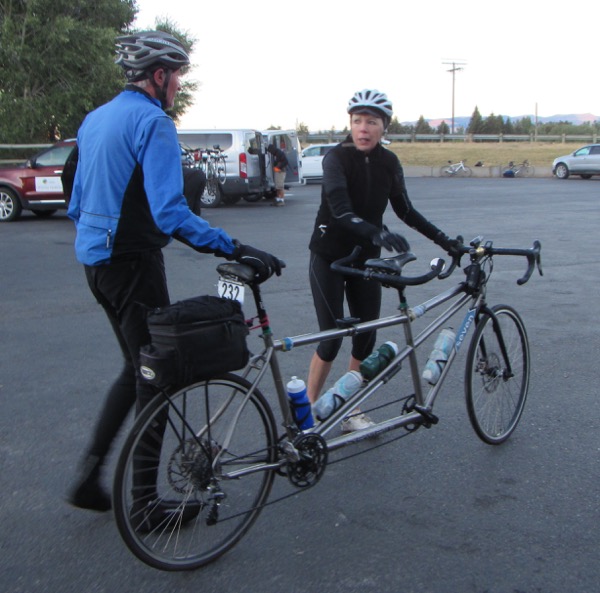 Here’s another shadow shot of us on our tandem, since we didn’t get any photos of us on the ride aside from the camp shot on Day 1.

The Saturday morning traffic out of Ennis wasn’t much more relaxed than the inbound traffic the day before, with several drivers feeling the need to lay on the horn to tell us we cyclists don’t deserve to be on the road. (At least that’s how I interpreted it. Perhaps I can be an optimist and think the horn blast was instead a gesture of support?)

Rolling out into the morning.

Somewhere in this field, between the glistening barbed wire and the misty pond, sandhill cranes were having a croaking conversation. 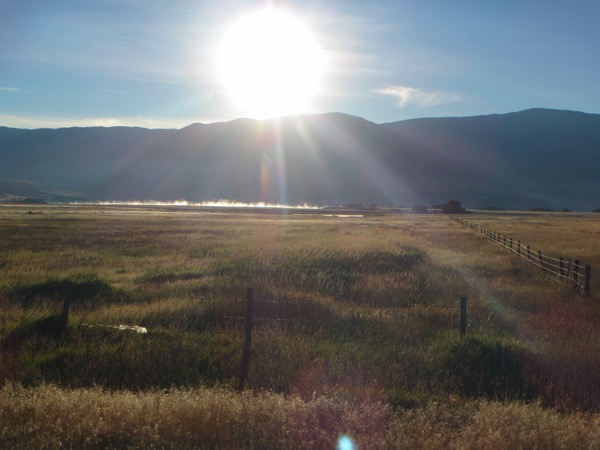 About 7 miles into the ride, we passed a pullout signposted as a chain up area. That’s when you know you’re in for a heckuva climb. I rather enjoyed this climb. It got me good and warmed up, and because there were two lanes on the uphill climb, traffic felt a lot more relaxed. It was also nice to have an opportunity to stop midway up the hill to remove layers (and take pictures). Here’s a cyclist conquering the hill. (It’s Jeff from Alberta, I believe.)

Despite the heat generated from the climb, extremities could still be cold. Here, tandem captain Jim takes the opportunity to warm up his hands. 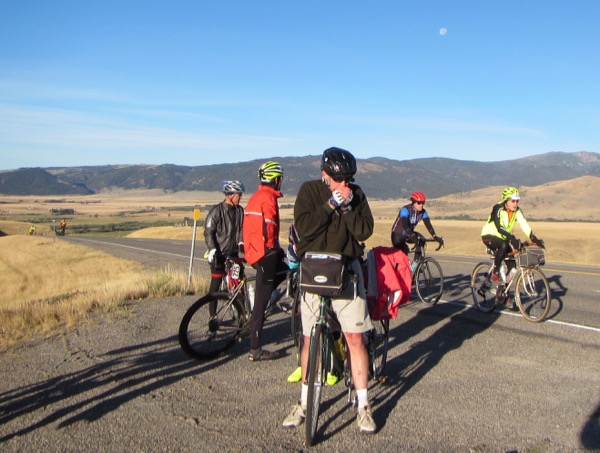 Jim and Janice passed us on the second phase of the uphill climb. Like me, Janice had the job title of tandem stoker / team photographer – several times I saw her wielding a camera from the back seat.

Usually, after a climb like this you can enjoy a bit of downhill. For me the downhill into Norris wasn’t particularly enjoyable. This was partly because the windchill on the descent left me gasping and slightly dizzy, probably from hyperventilating from the plunge into the chill. But also because of traffic. 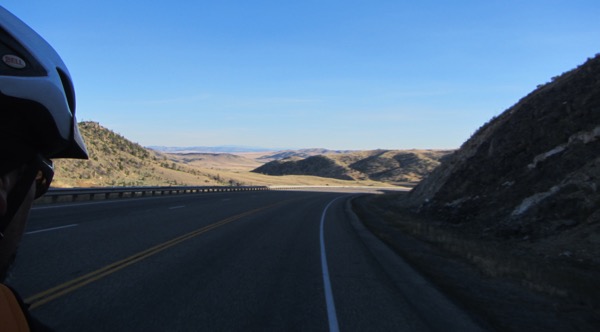 On account of the narrow shoulder with occasional debris and the difficulty of spotting road hazards as our path alternated between shadow and sunlight, safety on the higher-speed descent dictated that we ride in the lane. One driver – in a maroon car with tinted windows – decided that this was an affront to common decency, and they passed us at exceedingly close range, laying on the horn. To work out the angerdrenalin, I started shouting made-up cuss words, à la A Christmas Story (after getting permission from my tandem captain so as not to startle him). An invented transcript follows:

Shortly afterwards, an oncoming driver apparently missed seeing us and decided to pull into our lane to pass another vehicle, threatening us with obliteration in a head-on collision. Thankfully, Bugman anticipated this move, and we slowed down and got as far right as we could without running off the road. Defensive driving pays!

I am really not a fan of riding on Highway 287 in Montana. But in a rural area, sometimes that’s the only option for getting from point A to point B.

By the time we passed this giant roadside boom box in Norris (what up, Norris?), my nerves were shot.

We stopped at the rest stop to recalibrate. On account of the traffic, cyclists were asked to dismount and walk through the crosswalk to get to the rest stop. (View looking back towards the hill we had just descended. The next part of the route goes left in this photo, onto Highway 84.) 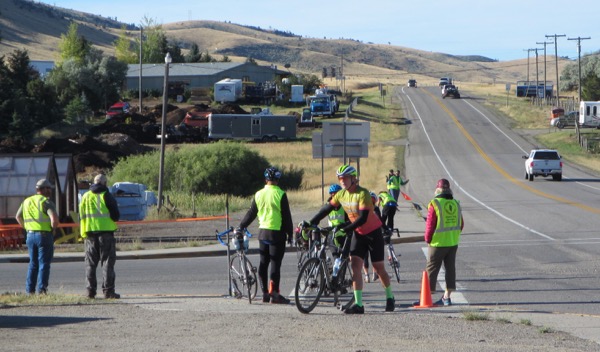 I was ever so glad to leave Highway 287 behind and turn east onto Highway 84. It was a gradual, curving descent along Hot Springs Creek to its confluence with the Madison River. Lovely! A favorite route segment! We took advantage of a pullout to let an RV pass us and to take some pictures. 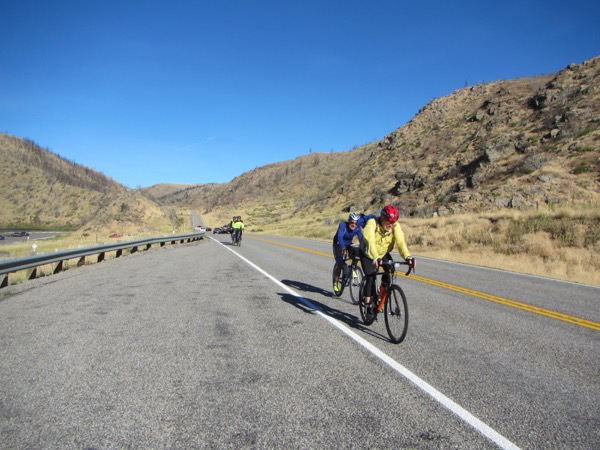 I attempted to get a silhouette photo of some fly fishers, but my camera focused on the opposite bank, capturing instead some of the thousands of sunlit flying insects that stood out against the darkness of the shaded trees. “Good trout food,” Bugman commented.

Nine out of ten cyclists prefer Clif Bars to rumble bars. At the lowest point of the road, near a turnout for a recreational area, there were tooth-rattling (for a cyclist) full-lane rumble bar boxes in each direction. Because, you know, drivers need reminders to slow down. 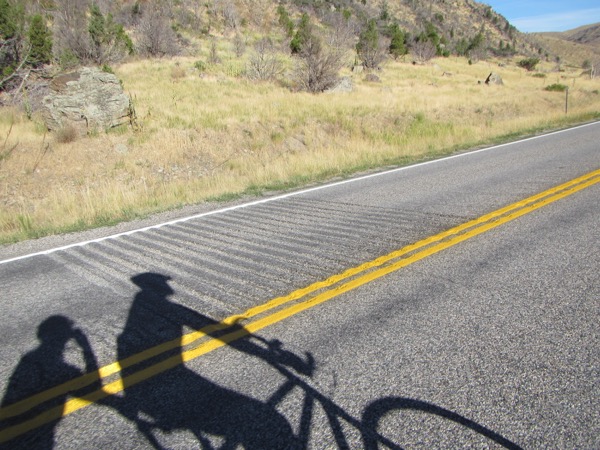 Another reminder to slow down was the state trooper patrol the CGY organizers had hired to watch over driver behavior on this winding, shoulderless road (see the lead vehicle, with the light bar in the rear window). I was grateful for the protection – it made a difference. We didn’t have any really scary or discourteous encounters with vehicles on this stretch of road. It’s sad that it takes direct supervision to ensure that drivers don’t needlessly endanger or antagonize cyclists. Or, maybe it was just chance. 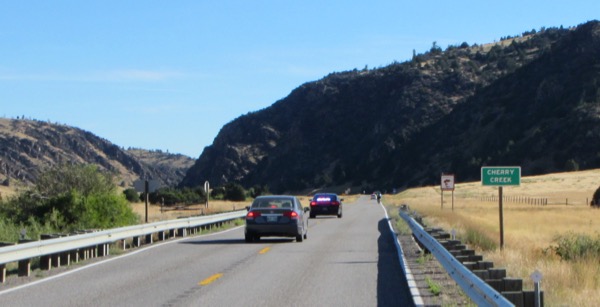 My view from the back of the tandem. Not bad.

Our riverside rest stop at mile 29:

I wasn’t the only one capturing the scenery.

The road down to the rest area was fairly steep, gravelly and washboarded. We, and a few other cyclists, decided to hoof it out of there.

On the other side of the rest area pullout, a volunteer flagged traffic to alert them to the cyclists that would be pulling out. Three cheers for CGY volunteers!

If you’ve been riding along a river valley, chances are, you’re going to need to climb up out of that valley. The view behind us was lovely!

As I was grinding away on the uphill, I had ample time to contemplate my newly-purchased Greater Yellowstone Coalition cycling gloves and the punny thought that I was now prepared if ever I got into a bear-knuckle brawl. Ha! 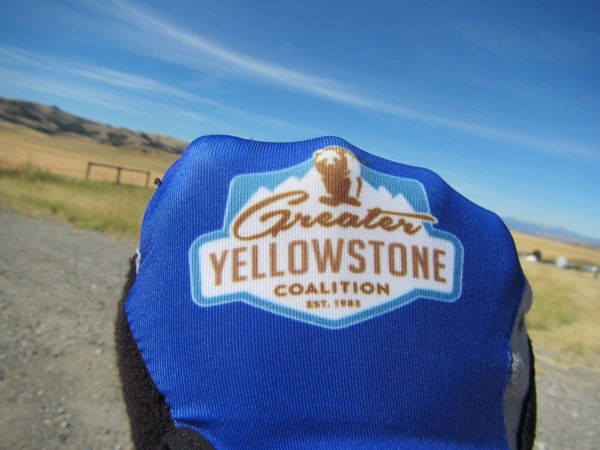 Our final destination of Bozeman was near! We could see signage! But, still, so far! It would be another long 13 miles before we could get off the bike for the day at mile 59. I was soooo grateful for the rest stop in a residential area at about mile 48. Props to the gear drop van for ensuring we didn’t miss the RIGHT TURN!

A picturesque barn. I wondered how many hundreds of barns we saw on our ride.

We ended our ride at GYC’s HQ in Bozeman around 1 p.m., where there was a BBQ lunch in the parking lot.

I was more than glad to get off the bike. My saddle sores were killing me. We couldn’t bear to sit on the saddle again for the last mile from the finish area to the fairgrounds where our car was parked, so we walked. (My gait might’ve had a touch of a bowlegged waddle.)

We picked up our bags, loaded the bike onto the car and checked in (15 minutes early) to our hotel in downtown Bozeman – The Lark. I approve of the place. Nice patio, and the rooms are well equipped. (I can’t tell you how many times I’ve had to try to use a hotel bed frame to open a bottle.)

After showers and a snooze, feeling slightly more human, we headed out to wander Bozeman one last time. 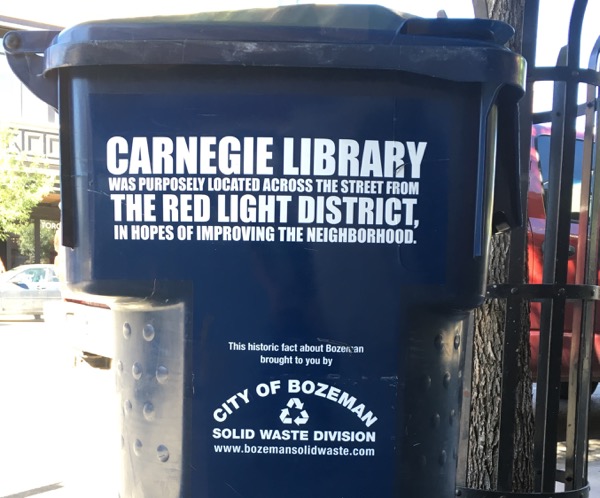 I loved seeing other riders wearing the t-shirts from the ride. It made for solidarity moments when we encountered each other. I loved this year’s shirt (color, softness, route map graphic), and was very glad to get it. Contrary to all prior years of the ride, we weren’t supposed to have gotten shirts as part of our registration swag. Instead, the plan was to give everyone a branded mess kit to use during the ride, to reduce our environmental impact versus using disposable plates and cups. Alas, the mess kits – ordered from China – got stuck in customs and didn’t arrive in time. Honestly, I liked the last-minute surprise t-shirt better. (I already have a mess kit anyway, which I’d used in previous years.) It’s just really fun seeing the flood of CGY shirts unleashed on the final day. 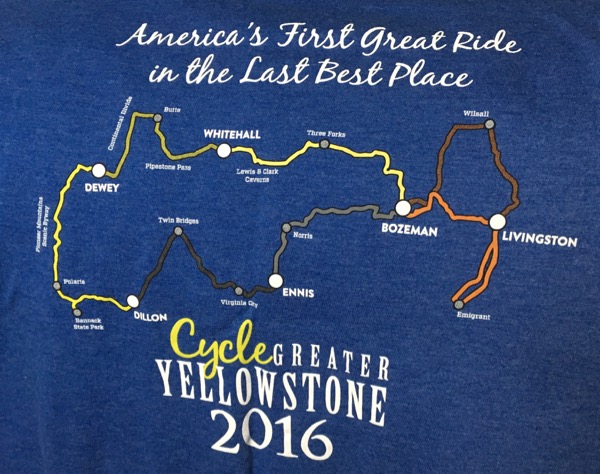 We ducked into a restaurant and wound up ordering more food than we could eat. Judging by the light fixtures and how my leftover pizza was wrapped, I deduced that the MacKenzie River Pizza Company takes its Montana cattle theme seriously.

I was ever so glad for the night’s sleep and the chance to take pressure off my posterior before driving home. I was a lot more comfortable sitting in the car the next day than I had been on the short drive to the hotel.

Will we be at next year’s CGY? I don’t know. It may depend on the route. Also, the time commitment to train for the challenging ride has been hard to sustain over the years. And we’re considering an international vacation tied to Bugman’s research that would eat up our vacation time and budget. But it’s been a heckuva ride these last few years, and I’m glad to have been a part of it!